Last Friday, I had the pleasure of taking part in the highly informal „6. Interregionale Silex Symposium” in Basel. The fabulous weather allowed for an early May bbq and beer gathering, followed by a stimulating evening of flinty-talk. 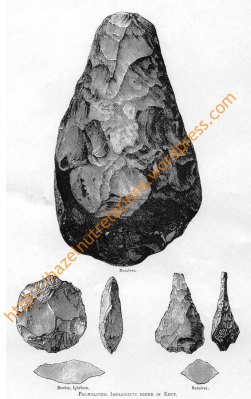 D. Schuhmann (Germany) started us off with some musings on the Yabrudien in Hummal other sites in Syria. H. Flück (Fricktal), really a Romanist, took a brave step standing up in front of a room full of hard-core prehistorians and introduced us to the fabulously beautiful knapping work of the Mayas. M. Bolliger (Fricktal) subsequently read out a highly informative alphabetic list of 1000 interesting rawmaterial sites in Europe. We will never again be lost for ideas on what to do when on holidays!

The break was spent with more interregional international beer (Efes, Kronenbourg and Bittburger; thanks to the little Turkish shop next door’s tendency to promote cosmopolitism) outside again and used for much valueless networking, the most useful kind.

I (Limburg) had the honour to start the second block and gave the audience my take on Kohn & Mithens (Antiquity 1999) so called Sexy Handaxe Theory. D. Brönnimann (Baselländer) then proceeded to succinctly explain us the many things we can not learn from flint thin sections. Dr. R. Jagher (Basel) finished off the evening by giving us a slightly worrying insight into the biology and toxicology of the Tuber silexorum (Common Flint nodule) from a Baseller point of view. After which we just managed to get the last train home (although there are rumours that a few locked themselves in the building and stayed a bit longer.)

Thanks everyone for a good evening!