Autumn 2012 my PhD-project entered a new phase and became part of the Gestures of transition project (click here for a summary or go to the SNF-project page). Also, I will be working on it pretty much full-time. This three year project consist of two complementary PhD’s, investigating the production, technology and use of the lithic assemblages from at least four occupational phases at the sites Arconciel/La Souche and Lutter/St. Joseph (AlS: Mauvilly et al. 2008a, Mauvilly et al. 2008b). Chronologically they roughly span the 7th and 6th mill. BC. Only a few sites dating to the Mesolithic-Neolithic transition in northern peri-alpine Central Europe have been excavated using modern methods. These well dated assemblages allow us to critically assess the potentially changing production and use of lithic artefacts across what is known as the Mesolithic-Neolithic transition.

Lithic artefacts from Arconciel/La Souche. After Mauvilly etal 2008.
A, B, C etc.: assemblages

Tool use and production at the central European Mesolithic-Neolithic transition: a microscopic use wear study of the chipped stone artefacts from Arconciel/La Souche and Lutter/St-Joseph

The well dated stratigraphy at Arconciel/La Souche allows a diachronic approach, enabling me to address the technological stability, as well as production and use. A sample of chipped stone artefacts, including formal tool types and non-formal tool types, from four occupational phases will be studied. I will adopt a pragmatic approach to microscopic use wear analysis (e.g.Betts Alison and Finlayson 1990, Richter 2007, Smith 2007), combining high-power and low-power analysis. For each occupational phase and selected artefact category, the relationships between function on the one hand and traditional typological classification, artefact morphology and raw-material on the other will be studied. The use wear analysis will be accompanied by a program of experimental work. 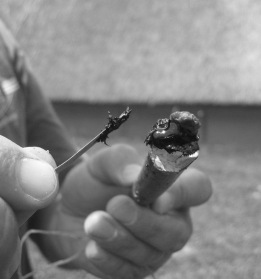 Experiments carried out at Estavayer-le-Lac

Various studies have shown that there is not necessarily a causal relationship between artefact form and function. Technology is often dynamic and fluid. Furthermore, the production of chipped stone artefacts, the cultural learning involved in the passing of these skills, as well as the use of these artefacts are to be regarded as everyday actions, engrained in the body image. Artefact production and use can thus be said to have an element of `historically situated ontogeny´ (Riede 2006, p. 55, Conneller 2006) which, of course, also has a strong social aspect (Keller and Keller 1996, Riede 2006, Warnier 2001).

Placing the use wear study results, as well as the technological analysis in this light will allow it to abandon traditional nomenclature and to gain insights into artefact ontogeny and the influence of the artefact’s use life on the morphology of the artefacts of the studied assemblages. Eventually this should lead to new interpretations of: 1.) the changing behaviour, 2.) site function (and intra-site spatial organisation) and 3.) more generally the dynamic, social and fluid nature of lithic technology throughout the Mesolithic-Neolithic transition in northern central Europe.

Some first results of the research by Laure Bassin and myself were published in a paper in Preistoria Alpina and in a paper to be published the Bulletin de la SPF.

Other current and recent projects

Lithic analyses of the assemblage from a rock crystal extraction site dated to the Late Mesolithc. This glacial archaeological site is located near the Fuorcla da Strem (on the border of the cantons of Uri and the Grisons) at 2815masl in the Swiss Alps.

With a small team of the Archäologischer Dienst, Kt. Bern, I carried out the rescue excavation (July 2017 – March 2018) of a newly discovered Middle/Late Bronze Age settlement above the southern shores of the Lac du Bienne. First results have been published in the Annuaire Archéologie bernoise 2018.

August 2015 I was part of a small team excavating this newly discovered Early Mesolithic site in the Bisistal, canton Schwyz in central Switzerland. The results of this very succesful excavation was published in the 2016 volume of the Jahrbuch Archäologie Schweiz.

The archaeology of the passes of Graubünden

Summer 2013 a small team started a 3 year survey project, investigating the prehistoric use of a number of the main passes in the Canton of Graubünden. A further focus will be WWI remains along the Swiss borders. The project is commissioned by the Archaeological Service of the Canton Graubünden. (Updates on this projects here.)

In August/September 2014 I undertook a campaign of test-trenching in Gampelen.  The Mesolithic occupation on the aeolian dunes north of the Lac de Neuchâtel is well know from both surface finds as well as the excavated site of Gampelen-Jänet 3. The work on a gas pipe going through the area made archaeological investigation necessary (Archaeological Service of the canton of Berne). The fieldwork and ongoing post-excavation work allow new insights into the landscape history of the north of the Lac de Neuchâtel and allowed us to better define the location of two of the known find-concentrations dating to the early and late Mesolithic. A short report was published in the 2015 Volume of Archäologie Bern.

I was recently involved in the Andermatt-Golfplatz project (ProsPect GmbH, commissioned by the Canton of Uri). I analysed the lithic assemblage from Hospental-Moos (excavated 2010). The assemblage dates to the late Mesolithic and almost the entire assemblage was made of rock crystal. It was published in the 2014 volume of the Urner Historisches Neujahrsblatt.

Together with a number of colleagues we excavated and published an alpine open-air site in the Oberengadin valley. Occupation: Mesolithic, Bronze Age, Early Modern Period. An updated and revised report has appeared in the new series Archäologie in Graubünden 1, 2013 (Cornelissen et al, p. 25-36).

Betts A. & Finlayson, B. 1990. Functional Analysis of Chipped Stone Artefacts from the Late Neolithic Site of Gabal Na’ja, Eastern Jordan, In Paléorient, 16, 2, 13-20.

Conneller, C. 2006. The space and Time of Chaîne Opératoire: Technological approaches to pastlandscapes, In Archaeological Review from Cambridge, 21, 1, 38-49.

Smith, S. 2007. The use wear analysis of chipped stone points. In: Finlayson, B. & Mithen, S. (eds.) The early prehistory of Wad- Faynan, southern Jordan: Archaeological survey of Wadi Faynan, Ghuwayr and al-Bustan and evaluation of the Pre-Pottery Neolithic A site of WF-16, Oxford: Oxbow Books, 284-319.